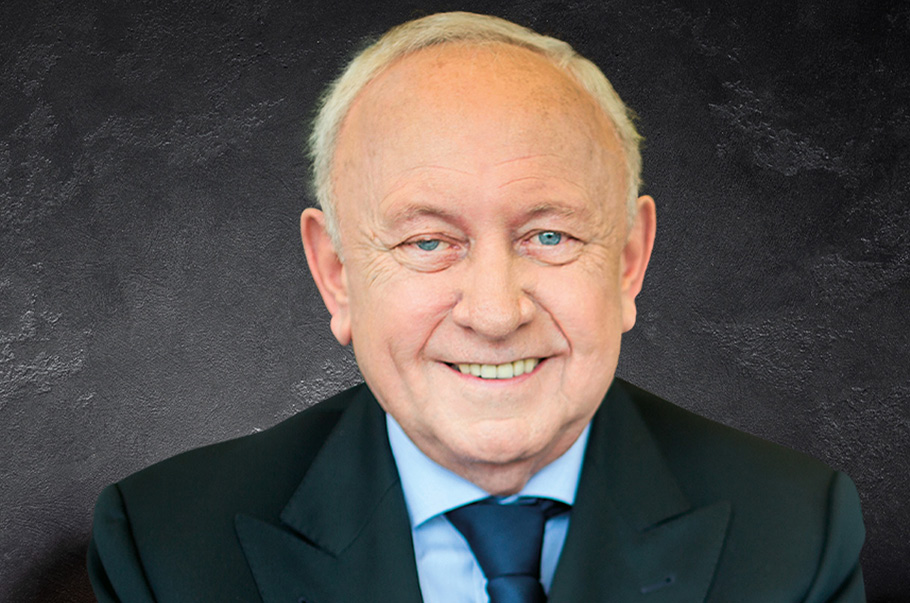 60 years on the Polish ice cream market is a significant anniversary. We talk about the history, challenges and future of the Polish confectionery industry with Zbigniew Grycan, the creator and owner of the “Grycan – Lody od Pokoleń” brand.
Mr. President, we congratulate you on your 60th anniversary, which is rare in our latitude, when it comes to business. What kind of ice cream did Poles eat more than half a century ago?

In 1960, ice cream was a seasonal product. The season began in May and ended in September.
So-called artisanal ice cream was mainly available on the market, although there were also products such as Snow White and Calypso, produced by dairies, state-owned plants. However, artisanal ice cream, based on milk and eggs, made up the vast majority.

When did ice cream become a year-round product?

Around the 1990s, when ice cream began to be imported from the West. After that, Western companies entered the Polish market, and several domestic companies were established, which began to produce so-called industrial ice cream. This was a completely new production.

We remember artisanal ice cream from our childhood days, which seems to us to be unusually good. Do you think they were indeed exceptional or, as it relates to our childhood, we are adding to their flavour?

It should be remembered that artisanal ice cream at that time was made on the fly, so fresh ice cream came out of the machine. They were not sold the next day, and were based on natural ingredients, namely milk, eggs, sugar and fruit. Therefore, the assortment was limited to 3-5 flavours. Especially in Poland, where we had no availability of other raw materials.

How difficult was it to do business under the previous system?

At that time we had a producer market, not a customer market. You sold what you produced. There was a problem getting basic raw materials. In my first factory, the ladies would come with cans of fresh milk on their backs, and when the season for a particular fruit came - we used it for production.

What happened when the necessary ingredients were in short supply?

Powdered milk was also used, but in order to get it you had to have connections at the pharmacy, because that’s where half-kilogram packages were sold.

Since we are talking about the 60th anniversary, let’s say that the tradition associated with the Grycan name is much longer.

It’s no coincidence that I got involved in this very industry. More than 100 years ago, my grandfather started making ice cream, my father also did it, and now I am doing it, together with my family. My daughters are involved in the company, with one of them, Margaret, working closely with us. This is the next generation to keep the family tradition alive.

Ice cream is a food product, but nevertheless always somehow distinct for many reasons. What in this distinctiveness is the greatest challenge, the greatest difficulty, and what in turn is the facilitation? The data shows that this is a product that more than 90% of Poles consume.

Ice cream is a tasty, sweet product, but not only that - it also has vitamins. It is not an unhealthy product. There are two schools - in Poland there is a belief that eating ice cream can give you a cold, while in the States colds are treated with ice cream. The main problem due to its nature is that ice cream melts, so the so-called „cold chain” must be maintained during production and distribution. The process of ice cream production begins with pasteurization to a temperature of about 88 or even 90 degrees. It is shock-cooled to 4 degrees, then frozen and re-cooled in a refrigeration tunnel at -40 or -35 degrees. Only after several stages does the ice cream go into the cold room, where the minimum temperature is about -20 degrees. Then we move on to distribution - to stores, ice cream stores, hotels or restaurants. So the time from the beginning of production to distribution is very long.

In 2021, revenues of the ice cream industry in Poland grew by 24%, and as we look at the period of the last 6 years, it has almost doubled. EBITDA margin in 2021 increased by 4 p.p. to nearly 14%. Ice cream is one of the most profitable industries in the food industry in Poland, but was 2021 actually a good year, or was it specific, and what is the reason for that?

It was specific and it was good, although not for everyone. In the ice cream industry there is a division between impulse ice cream, and family ice cream. Ice cream shops or cafes also have ice cream in their offers. Our company is the largest producer of premium family ice cream, but we also have the largest chain of ice cream shops and cafes, where ice cream is sold by the scoop. So the pandemic restrictions also affected our business. Masks had to be worn, making it impossible to consume. Shopping malls, where most of our outlets are located, were closed. So we were a bit disadvantaged and were not among those who achieved good results. It should also be remembered that on the Polish market in the ice cream business, discount stores currently hold more than 50% of the market, which in turn have their own brands. Also, production is very large. We have modern plants in Poland, with good capacities, but producing so-called foreign brands. So some have come out ahead, while others, including us, have suffered losses.

As we look to 2021, the volume of ice cream exports from Poland increased by 17%, to 112,000 tons. Over the past five years, it has increased by 124%. In terms of value, it looks even more impressive, as we have an increase of 22% and 168%, respectively. We export mainly to mature European markets, to the European Union 188% of the volume, but the list of contacts also includes exotic countries on all continents such as Colombia, the United Arab Emirates, Israel and Gambia. What makes ice cream from Poland such an export success?

Polish food in general is very well received in the world. We don’t use a lot of chemicals, we produce using traditional methods, but we are also competitive in terms of price, because, as I mentioned earlier, we have modern plants with large capacities. On the other hand, it should be remembered that we also produce a lot of foreign brands that are outsourced in Poland.

Do you remember your first foreign contract?

It was after 1990. In the 1980s there was still no way to export. At that time it was too difficult to get raw materials, the main struggle was to produce at all.

The average consumer in Poland consumes 5.5 kg of ice cream per year, which is far less than the inhabitants of Western Europe, Scandinavia or the USA. Belgians have a result of 12 kg, Swedes 6 kg, and in the United States consumption is almost 4 times higher than in Poland. What could determine the growth of this industry in Poland?

According to the first quantitative studies, the result was only 3.5 liters, so the current 5.5 kg is not small at all. I would like to point out at this point that usually the data for ice cream is just given in liters, because the conversion rate to kilograms for different manufacturers is different. I will immodestly say that in our case, 1 liter weighs about 70-80 dkg, while it is often about 45-50 dkg.  But back to the question -– this industry is growing. The availability of ice cream is very wide, but as Poles we are not yet in the habit of reaching for it often in the store. In the States, the approach to these products is completely different, as can be seen, among other things, in American movies, where a box of ice cream is a cure-all. In our country, there is a belief that ice cream is consumed only in the summer. It would be advisable to change this attitude, as it is a great dessert also in the other months of the year.

Won’t there be such an unpleasant clash with the ice cream industry hitting a brick wall, because habits are also thinking about as little sugar or fat as possible. Won’t these new consumer habits limit the development of the industry?

Our company is very innovative by virtue of the fact that we were the first in Poland to introduce such a large assortment. We offer new flavours to consumers all the time, many of which we have created on the Polish market. Some are accepted, some are not, but it is already quite a lot more than 100 proposals. On the other hand, we have the opportunity to build a direct relationship with the customer, and we see on an ongoing basis which flavours people are more willing to buy. So time and more promotions are needed. People need to reach for ice cream not only in the summer, although it is known that the weather is the main factor.

What kind of ice cream does consumer Zbigniew Grycan like the most?

Because of my age, though not only, I eat ice cream that I used to eat in my childhood. And it’s not just me - vanilla, cream, chocolate and strawberry ice cream, i.e. the classics, are produced and sold the most. Of course, there are many other flavours that I enjoy eating, but I like the traditional ones best. 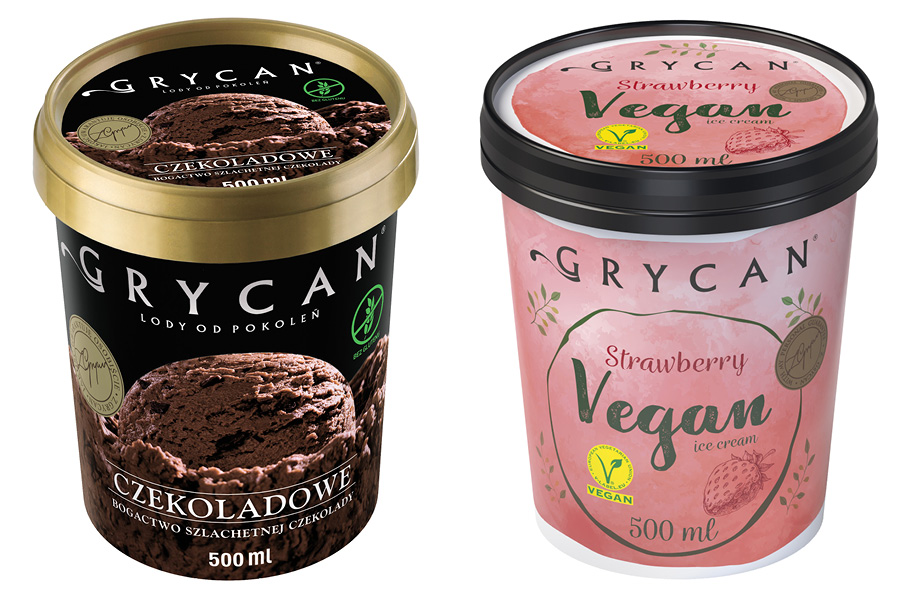