Global players and brands with a history 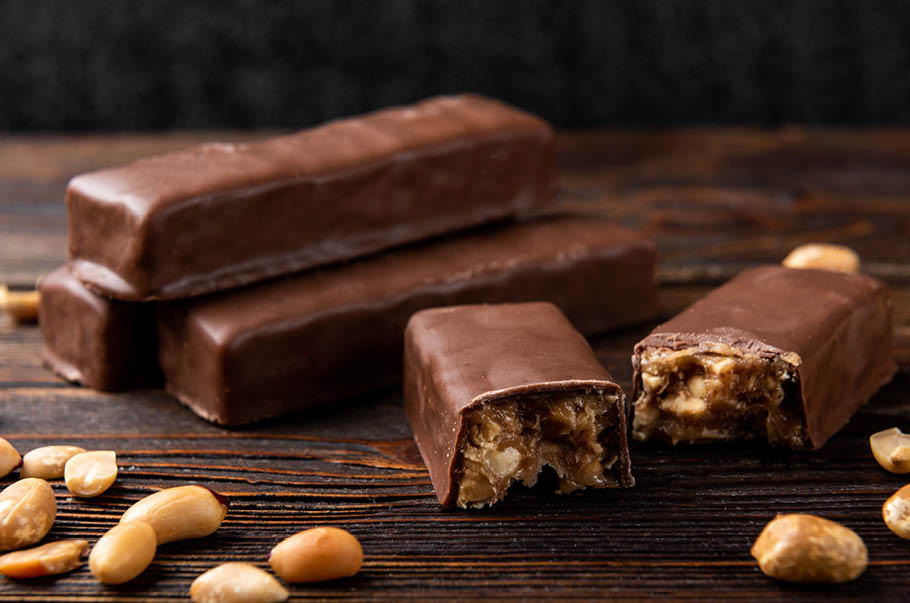 Promotion of chocolate and bars in promotion leaflets of selected countries in Central and Eastern Europe. Chocolate and bars are products which are frequently advertised, both in the media and on shop shelves or promotional newsletters. It is not surprising – despite a strong trend of preferring healthy and dietetic food – sweet snacks act on the imagination of many consumers, promising them a moment of pleasure.
Bars, as impulse goods, tempt clients at the shop cash desks. Chocolate is good as a small gift or souvenir from a journey. Therefore, this category of sweets received a lot of offers in commercial leaflets. FOCUS Research International examined which companies and what brands were displayed the most in the newsletters of trade networks of selected European countries in 2019.

There is no denying that in terms of quantity of promotions in commercial leaflets the highest results among producers were obtained by global concerns, such as Mondelez, Nestlé or Mars. Although on each of the researched markets promoted are mainly local brands and products, in the majority they already do belong to global companies. Concern Mondelez, established as a result of the division of the company Kraft Foods in 2012, having in their portfolio such brands as Milka, Alpen Gold, Toblerone or Oreo, noted the greatest number of promotions in the newsletters of almost all examined markets in the Chocolate category. In the category of Bars the leaders were Nestlé and Mars. The Swiss company Nestlé is the owner of local brands such as Hungarian chocolate bars Balaton, and even famous in the Czech Republic and Slovakia long-term confectionery brands having their roots in the 19th century (Zora) or the 1920s (Orion).

This is not the case for the American concern Mars, which in the category of Bars was mainly promoting its flag, international products present on each of the surveyed markets, such as Bounty, Mars, Snickers, Twix bars and its oldest bar – Milky Way. Similarly, the Italian company Ferrero, known also for products of other categories of sweets (Nutella cream and chocolate egg with a surprise – Kinder Surprise), in the categories of Chocolate and Bars bet on known brands such as Duplo, Nutella B-Ready or Kinder.

Attention should be drawn to the promotional ranking in the newsletters of the Baltic countries, especially Latvia and Estonia. In the surveyed commercial leaflets, local companies occupied the highest places in terms of the number of offers. Both, the Latvian sweets brand Laima and Estonian brand Kalev – both with traditions going back to the 19th century – belong to the Norwegian concern Orkla, however they maintained a strong position on the domestic market, and also in the neighboring countries (products of the brand Laima were often promoted also in the Lithuanian newsletters). Similarly, a strong brand in Poland is E. Wedel. This brand of sweets, established in 1851, was bought by a Japanese concern Lotte Group ten years ago. Though, at first there were critical opinions about the change of marketing communication strategy, currently the brand has come back to stressing its history in advertising material. In Poland chocolate of the E.Wedel brand enjoys great popularity, which is also visible looking at the number of offers in trade leaflets. A large number of promotions in leaflets was also noted by products of the Polish company Wawel whose brand can boast a long history, too.

A relatively young company, however, is the Ukrainian company Millennium, existing since 1999, which noted the greatest number of promotions in the category of Chocolate in Ukrainian leaflets. Also domestic bars and chocolate of the Roshen brand proved to be popular in the Ukrainian newsletters, though they were outstripped in the ranking by global concerns. One should also mention a big number of offers of products from the category of Chocolate noted by local Romanian companies: Heidi – a company belonging now to the Swiss company Läderach – as well as Kandia Dulce, which was acquired by an Austrian concern Julius Meinl.

The market has its own laws. In all the examined promotional leaflets of trade networks in the selected European countries the greatest number of promotions were noted by international concerns. A huge number of offers pertained to products of global brands, known in the whole world, for instance Snickers, Kinder or Oreo. However, globalization led to the taking over of local companies and brands by huge concerns. Sometimes, concerns decide to carry out a rebranding of the existing brands. Often, however, with much greater benefit, they take care of local brands, being aware of the loyalty of consumers of a given market. Chocolate product brands are an exceptional case because many of them boast a long history and tradition, and the development of companies producing them often coincided with the time when national awareness was awakening in the citizens of the then Central and Eastern counties, i.e. in the second half of the 19th century or the first half of the 20th century. This is the case for the Polish brand E.Wedel, Latvian Laima or Estonian Kalev.