The sweet part of the Polish market 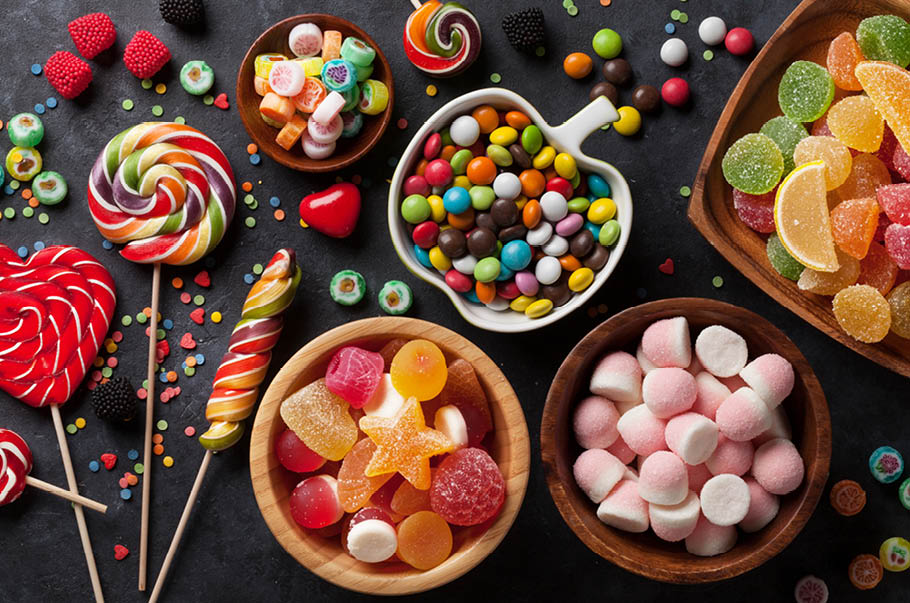 Chocolates, candy bars, wafers, cookies, jellies, caramels… It is impossible to list them all, and yet, new products are still appearing on the market, responding to the changing consumer needs. Moreover, the Poles have their favourite products accounting for the largest share of sales.
Why do we love sweets? The answer can be only one – they are pure pleasure. It is confirmed by Nielsen research showing that as many as 79% of the surveyed predominantly reach for sweet snacks for their own pleasure. But this is not the only reason. Consumers find confectionery to be a perfect mood booster, as well as an antidote for so-called “bad days”.

Polish people are very eager to reach for sweet snacks, as evidenced by the growth in value of this market. As the consumers themselves admit in a survey conducted by SWResearch on request of ETi1, this is one of the most popular things they associate with pleasure, alongside relaxing in the daytime, meeting with friends or a coffee break.

The respondents were also asked about the frequency of consumption of sweet snacks. Most of them – almost 41% – eat sweets several times a week. Almost every fourth person (23%) just cannot imagine a day without “something sweet”. This group is dominated by people aged 25-34, comprising the largest percentage (27%) of those surveyed who have a sweet snack every day. Among the survey, 3% do not eat sweets at all, whereas 3% and 4% only reach for them once per month or even less frequently.

Few people plan eating confectionery. When asked in what situations they reach for sweets, Polish people admit they usually do so on impulse, when they get a craving for something sweet (37%). A small snack also allows them to cheer up (31%) or cherish a moment just for themselves (12%). On the other hand, only every tenth person (11%) sees the purchased sweets as a dessert after dinner.

The market of sweets

According to Marek Przeździak, the President of the Association of Polish Chocolate and Confectionery Manufacturers (Polbisco), the Polish market of sweets and snacks is already worth PLN 17.3 billion and accounts for 13.3% of the turnover of the entire food basket in terms of value. Cookies are the largest category, comprising 13.6% of the turnover in terms of value. On the other hand, the production of chocolate and chocolate products between January and September 2019 rose by 0.1% compared with the analogous period of 2018, totalling 307,000 tons.

The confectionery industry is a richness of tastes and sensations – including both typically chocolate-based categories, such as dragées, chocolate bars, candy bars, chocolate figurines and sets, pralines, but also those with less chocolate or with just an addition of chocolate: ready-to-eat cakes, candies and lollipops, impulse wafers, sweet cookies, muesli bars, halva and sesame candies, as well as chewing gums. “Among them, the stable leading position has invariably been maintained for many years by the categories of cookies, chocolate bars and pralines. The other end includes halva and sesame seed candies as well as muesli bars, the smallest categories in terms of value for the entire sector. The greatest increases in sales in the annual period (October 2018 – September 2019) were recorded by the categories: muesli bars (+13.7%), wafers (+9.3%), and chocolate bars (+9.1%). The increases in sales resulted, among other things, from a wider offer and new products within the aforementioned categories. A significant part of the categories in the confectionery industry is subject to large seasonal fluctuations, with sales increases falling on two moments of crucial importance to the sector, i.e. Easter and Christmas. Their sales in pre-holiday periods can be doubled or even tripled in relation to average sales in the preceding months,” – says Magdalena Mucha, the Client Response Associate at Nielsen2.

In that special period, the highest growth of seasonal sales is recorded by the category of chocolate figurines and sets – its sales grow three or even four times compared with average sales in the preceding months. Within this category, we distinguish marzipan products, Advent calendars, filled or unfilled figurines, praline mixes, as well as all kinds of figurines of different shapes, flavours or dimensions. “The increase in sales also results from a wider assortment available at store level: the greatest diversity of products in this category can be found in large-format stores (hypermarkets, supermarkets, discount stores), but also in grocery stores (large, medium and small), despite much more limited sales area. The most crucial month for pre-holiday confectionery sales is December (accounting for 11.9% of annual sales in 2018),” explains Magdalena Mucha from Nielsen. In 2018, the amount of pre-holiday sales (November and December) comprised 21.2% of annual sales in terms of value – and, despite many gift occasions appearing throughout the year, it still remains the most tempting to manufacturers.

According to the CMR data, confectionery is among the products most frequently purchased in Polish small-format stores with an area of up to 300 square metres. Between October 2018 and March 2019, different sweets would appear on every seventh cash receipt, accounting for 4.5% of the total sales value.

“The largest share in the confectionery sales value in that period comprised cookies, chocolates and chocolate bars – 18%, nearly 14% and 13% of the share respectively,” says Ewa Pikuła of CMR.

It is hard to find a small-format store in Poland whose offer would not include at least several different sweets. “In the period under discussion, customers could choose from an average of 180 products at an establishment of this format, whereas most places on the shelves were occupied by cookies (above 40 variants), chocolate (almost 25 different bars), and candy bars (19 products). Between October 2018 and March 2019, cookies, chocolates and candy bars accounted for almost a half of the entire confectionery sales value, available in almost all small-format stores up to 300 square metres,” Ewa Pikuła admits.

According to the CMR data, the leader in the category of cookies in the period under consideration was Mondelez whose products could be found in more than 90% of small-format stores. It was closely followed by Colian and Bahlsen with availability exceeding 80%.

“Safe bets in the category of candy bars and wafers are the Snickers and Prince Polo brands; between October 2018 and March 2019, they could be found on shelves of 9 out of 10 small-format stores of up to 300 square metres. In that period, customers of a typical neighbourhood store could choose from an average of 19 candy bar variants and about 14 different wafers,” says Ewa Pikuła of CMR.

On the other hand, the leader in the segment of impulse wafers is Mondelez (with the Prince Polo brand) which accounted for 1/3 of the value of sales in this category between October 2018 and March 2019. Its chief competitor is Colian (the manufacturer of Grześki), which achieved a share of nearly 24% in impulse wafer sales in the same period. Further places were occupied by I.D.C. Polonia with Góralki and Nestle with the Princessa brand.

“The sales of chocolate are largely season-dependent, and the best months for this category are March as well as November and December. This category is essentially divided into milk, dark and white chocolates. Each variant may occur in an aerated version or feature such additives as milk or fruit filling, raisins and nuts, biscuits or cookies, as well as ingredients present in premium chocolates: salted caramel, spices, dried fruit, coffee seeds, and flower petals. Between October 2018 and March 2019, a customer in an average neighbourhood store could choose between more than 20 different variants of chocolate bars, of which 4/5 were comprised by milk products reaching nearly 80% of the total sales value of chocolate. The company holding 44% of the share in the sales value of chocolates is Mondelez, with Wedel as the runner-up holding a more than halved share. Most frequently, the customers chose 100-gram bars, accounting for more than 2/3 of the total number of transactions, whereas higher-weight variants comprised a small percentage of sales in this category. Chocolate under private labels of trade chains or distributors was offered by approx. 2/5 of small-format establishments at that time, accounting for more than 8.7% of all chocolate transactions,” Ewa Pikuła says.

Marek Przeździak, the President of the Association of Polish Chocolate and Confectionery Manufacturers, admits that, when analyzing key consumer trends, one can notice a general upward trend in the sector of snacks – healthy sweet or salty snacks are currently the focus of interest of the consumers. “As late as several years ago, consumers in Poland paid no attention to such issues as food waste, ecology, or clean label. The change of awareness and eating habits of Polish purchasers makes us follow those health-promoting and convenience-related trends,” Marek Przeździak explains.

Moreover, recent research has shown that snacks are important to consumers as far as mental or emotional wellbeing is concerned. A snack becomes not just food but a gift or a way to transfer rituals connected with cultural snacks to one’s closest relations. “The direction of development of the global food market in 2020 is surely set out by innovative trends. One of the most important things that should be promoted in products is clean label,” the President of POLBISCO says.

The global category of chocolate confectionery actively responds to the needs of a modern consumer, with emphasis on the challenges connected with a combination of the pleasure aspect and with concerns over excessive sugar consumption. As explained by Honorata Jarocka, the Senior Food and Drink Analyst at Mintel, the position of chocolate seems unthreatened, despite the increased interest in healthy lifestyle. According to the consumer research conducted by Mintel, more than three fifths of respondents in Italy, Spain and Poland declare they allow themselves for occasional “weakness”.

“When thinking about the possibilities in the context of product innovation, there are three areas worth pondering: premiumization, building of added value through functionalities – e.g. those connected with use of superfoods-type ingredients or probiotics – as well as experiments focused on unique flavours, textures, visual aspects and storage modes (e.g. chocolate confectionery for consumption after cooling).

Another interesting area includes variants consistent with the vegan diet, whereas Mintel data show that the interest in vegan milk chocolate is reported by almost two fifths of respondents in France, Spain and Poland. These are consumers who have not tasted such innovations so far but would like to. This direction is currently illustrated by the decision of Mars to release a vegan line of chocolates in the UK under the Galaxy brand, indicating that the “plant niche” is not just the domain of small players anymore but has earned the interest of mass brands. Of course, it is worth mentioning that a considerable portion of the chocolate market, i.e. dark chocolates, has vegan attributes, even if packaging of many of them lacks vegan statements. Therefore, experiments in the area of plant-based alternatives for milk chocolate are both a challenge and a possibility of development,” Honorata Jarocka says. According to the data of Mintel’s GNPD (Global New Products Database), in the period of three years until October 2019, vegan statements were found on 4% of all global implementations in the category of chocolate confectionery, whereas this share is predicted to grow.


1 The data have been given on the basis of the results of a survey conducted by SWResearch for ETi. The survey was carried out on 8-13 May 2019 using the computer-assisted web interviewing method (CAWI) on the online SW Panel. The study included 1007 interviews with Polish people over 18 years of age.

tagi: The sweet part of the Polish market ,